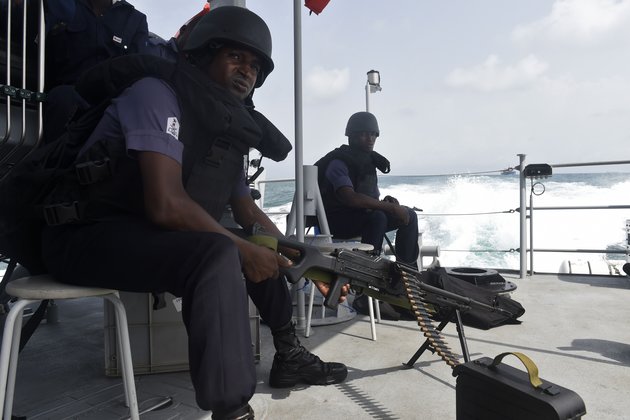 Known as the Deep Blue Project, it was initiated by the federal ministries of transportation and defence in 2017. It's being implemented by the Nigerian Maritime Administration and Safety Agency. Personnel have been hired from the navy, army, air force, police, and Department of State Services.

The $195 million project is said to be the first integrated maritime security strategy for West and Central Africa. It's designed to tackle piracy, sea robbery, and other crimes at sea in Nigerian waters and up to the the Gulf of Guinea.

The Gulf encompasses over 12 countries from Senegal to Angola. It's a strategic maritime domain with huge natural resources, and provides a critical route for international shipping.

But the region, and Nigeria in particular, has recorded frequent vicious attacks against vessels and multiple kidnapping of seafarers for ransom by pirate gangs. The gangs have evolved in sophistication. They have also extended attacks as far as 200 nautical miles from shore.

Most studies, including mine, affirm that the root of maritime insecurity in the Gulf of Guinea stems primarily from bad governance. Despite endowment with vast natural resources, most of the states parade some of the worst indices of human development. These include environmental devastation, high unemployment rates and widespread poverty generated by corruption and bad governance.

I also found that unsustainable practices of oil companies have destroyed traditional farming and fishing livelihood systems in coastal communities. This has forced some people to make desperate choices. With declining opportunities for legitimate livelihood amid affluence, some young people in the region take to criminality for survival.

Pervasive corruption among maritime security forces has made them unequipped to deal with security threats. The Deep Blue Project is obviously designed as a reactive intervention against piracy. Yet successfully countering the evolving threat depends on addressing enabling factors rather than just reacting to events. It also, crucially, must include avoiding mistakes made in the past.

Nigeria depends primarily on oil export through the Gulf of Guinea's maritime corridor for much of its revenue and foreign exchange earning. However, maritime threats cost it an estimated $26.3 billion annually.

Nigeria also accounts for 75% of crime in terms of incidents in the Gulf of Guinea, particularly piracy. The International Maritime Bureau said 135 crew were kidnapped from their vessels worldwide in 2020. The Gulf of Guinea accounted for over 95%.

In the first three months of 2021, the Gulf of Guinea accounted for 43% of all reported piracy incidents and 40 crew kidnapped. The pirate gangs originate almost exclusively from Nigeria.

As a result the global maritime community has consistently called for enhanced efforts to tackle piracy and maritime insecurity in the region.

This has led to the adoption of a host of national, regional and international initiatives. There is equally increasing deployment of naval forces by Denmark, France, Italy and the US.

How far can the project go?

How far the project will go in deepening maritime security depends on several factors.

The first is whether mistakes of the past are avoided. These have included:

an overtly militarised response to threat,

negligence of the driving or enabling factors of criminality,

dearth of accountability mechanisms in response initiatives, and

poor appreciation of the dynamics of the wider criminal space.

Already, the project's largely military-centric approach has been criticised. This means that the intricate drivers of maritime insecurity, especially piracy, are ignored. These include socio-economic, environmental and governance factors that enable piracy to fester.

A related factor is the inter-agency rivalry which has undermined multi-agency interventions during successive administrations. The multi-agency nature of the new project holds great promise. But in it lies a peril common to Nigeria's approach to security. Rivalry and mistrust manifest among Nigeria's agencies. This results in weak coordination, limited intelligence sharing and sub-optimal performance.

There are also concerns over robust internal mechanisms for ensuring transparency and accountability. These are paramount to the project's success. Projects such as this have in the past served as avenues for vested interests to divert or misappropriate public funds. Politicians, government officials and corporate firms have been involved.

The Olusegun Obasanjo administration was accused of spending between $300 million and $400 million on equipment for fighting maritime insecurity with nothing to show for it.

Similarly, the Goodluck Jonathan administration used the public-private partnership model. It committed resources towards acquisition of assets to fight maritime insecurity. But it was not sustainable.

These concerns are fundamental given that Nigeria's finance minister, Zainab Ahmed, recently disclosed that Nigeria will borrow $1.76 billion from the domestic markets to fund the fight against insecurity. Thus, lack of transparency may mean that revenue generated through the project may not be used judiciously.

Poor maintenance culture as seen in the aviation, energy, health and transportation sectors may also mean that the recently acquired assets will grind to a halt sooner than expected. These include:

Another factor is the project's interface with other regional initiatives to counter the vested interests that sustain piracy. Ransom payment has made piracy extremely lucrative. This has entrenched a network of interests of both foreign and local state and non-state actors. Some global shipping companies and foreign actors are using cash and bypassing local authorities in the region to negotiate directly with pirates.

Without the government's commitment in addressing these factors, the project will only be an addition to maritime security initiatives in the troubled region.